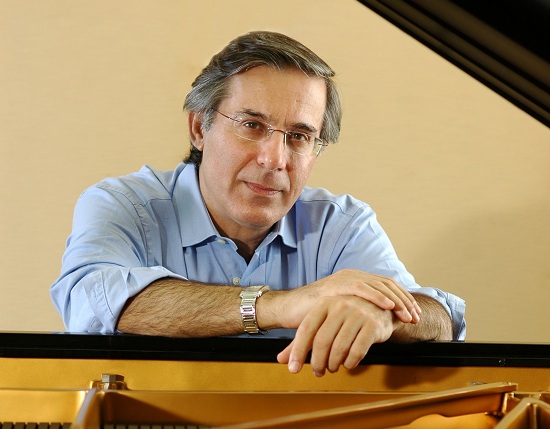 “First of all there is his sound — a burnished, unforced bronze-like sound somewhat in the Rachmaninoff manner. In a day when so many pianists sound bleak and percussive, Cohen produces a big sound that never splinters and is capable of any kind of nuance. He understands the pedals. He has a world-class technique. His playing, color and all, has text-book clarity. And he understands the Romantic style.” -Harold C. Schonberg

The Brazilian-born pianist Arnaldo Cohen, now living in the United States, has long had a reputation for astonishing his audiences with the musical authority and blistering virtuosity of his performances. His solo recitals everywhere draw enthusiastic crowds of cognoscenti. Critics, too, marvel at his mixture of musical complexity and élan.

“A model of balance and imagination” was Steve Smith’s verdict in his review of Mr. Cohen’s Town Hall recital in The New York Times last season.

After winning First Prize at the 1972 Busoni International Competition, in Italy, Mr. Cohen scored a triumph at the Concertgebouw in Amsterdam. Soon after he moved to London and went on to build a repertoire of some 50 concertos and to perform with such orchestras as the Royal Philharmonic, the Philharmonia, the Bavarian Radio Symphony Orchestra, Orchestra de la Suisse Romande, and the Santa Cecilia Orchestra of Rome, collaborating with conductors Kurt Masur, Kurt Sanderling, Klaus Tennstedt, and Yehudi Menuhin.

Mr. Cohen is the recipient of a fellowship awarded by the Royal Northern College of Music in Manchester, and held a professorship at the Royal Academy of Music in London. In 2004, after living in London for 23 years, Mr. Cohen relocated to the United States and now holds a piano professorship with tenure at Indiana University in Bloomington.