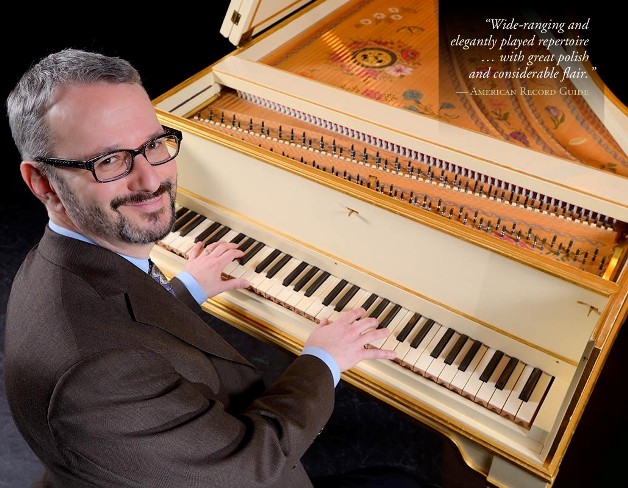 Byron Schenkman has recorded more than thirty CDs of 17th– and 18th-century repertoire, including recordings on historical instruments from the National Music Museum, Vermillion, and the Museum of Fine Arts, Boston. A recipient of the Erwin Bodky Award from the Cambridge Society for Early Music “for outstanding achievement in the field of early music,” he was voted “Best Classical Instrumentalist” by the readers of Seattle Weekly, and his piano playing has been described in The New York Times as “sparkling,” “elegant,” and “insightful.”

He has been a featured guest with the Chameleon Arts Ensemble of Boston, the Daedalus Quartet, Les Enfants d’Orphée, the Northwest Sinfonietta, Pacific Baroque Orchestra, Philharmonia Northwest, and the Portland Baroque Orchestra. He was also founding co-director of the Seattle Baroque Orchestra with violinist Ingrid Matthews. In 2013, he launched Byron Schenkman & Friends, a Baroque and Classical chamber music series at Benaroya Hall in Seattle. Schenkman is a graduate of the New England Conservatory and received his master’s degree with honors in performance from the Indiana University School of Music. He currently teaches at Seattle University and has been a guest lecturer in harpsichord and fortepiano at Indiana University.

WIN A TRIP TO WARSAW
You will have a chance to win a trip to Warsaw for the Finals of the 18th International Fryderyk Chopin Piano Competition, to be held October 2020 in Warsaw. The package includes a round trip flight for one person, two tickets for the Finals and three days of accommodation. To qualify for the draw, you will have to be a subscriber OR a single ticket holder for the Kevin Kenner recital. The draw will be held at the Kenner performance on November 24, 2019.