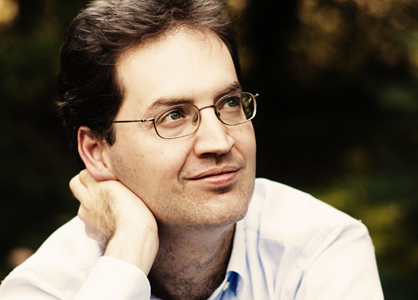 “Várjon here attempts to uncover connections between composers, with specific reference to the influence Liszt had upon Berg and Janácek…Negotiating dynamic shifts of emphasis, Várjon displays that most valuable of gifts: the ability to play in a way which makes you listen anew to the familiar.” -The Independent

Dénes Várjon studied at the Ferenc Liszt Academy of Music in Budapest with, amongst others, composer György Kurtág. He is a regular guest at festivals including the Salzburger Festspiele, Lucerne Festival, Biennale di Venezia, Marlboro Music Festival, Klavier-Festival Ruhr, and Edinburgh Festival.
He is invited annually to András Schiff’s and Heinz Holliger’s Ittinger Konzerttage in Switzerland every year and enjoys a longstanding relationship with the Open Chamber Music-Prussia Cove (UK).
He has performed with major orchestras such as The Camerata Salzburg, Academy of St. Martin in the Fields, Wiener Kammerorchester, and many others.
Hungarian pianist Dénes Várjon has received much attention for his chamber music prowess, notably in collaboration with cellist Steven Isserlis and his solo
recordings and performances in the last decade have received international critical acclaim.

He has recorded for the Naxos, Capriccio, and Hungaroton Classics record labels. His recording of Schumann pieces together with the cellist Steven Isserlis was issued in 2009 on the Hyperion label. His first solo CD with pieces of Berg, Janáček and Liszt was released by ECM in January 2012.