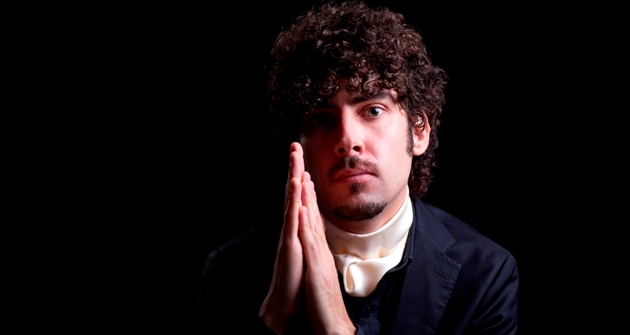 Please click here to read notes for this event. There will be no printed programs at the venue.

For this concert we will only sell 50% of the theatre’s capacity.
Proof of vaccination and a piece of valid government photo ID will be required to access the venue.
Please read the safety plan for this event.

If you are purchasing a single ticket, please help us by not choosing a seat that is part of a block of three or four seats. Once you pick a single seat from these blocks, we will no longer be able to sell the rest of the seats in that block.

Praised by The Daily Telegraph for “his beautifully light touch and lyrical grace” and called by Gramophone “one of the more original thinkers of his generation”, Federico Colli has been rapidly gaining worldwide recognition for his compelling, unconventional interpretations and clarity of sound. The remarkable originality and highly imaginative, philosophical approach to music-making have distinguished Federico’s performances and recordings as miraculous and multidimensional. Federico’s first release of Sonatas by Domenico Scarlatti, recorded on Chandos Records for whom he is an exclusive recording artist, was awarded “Recording of the Year” by Presto Classical. The second volume of Scarlatti’s Sonatas was named “Recording of the Month” by both BBC Music Magazine and International Piano Magazine and it has been chosen by BBC Music Magazine as one of the best classical albums released in 2020.

In addition to live performances, Federico maintains busy recording schedule. His future releases projects on Chandos include a Russian project focused on Shostakovich and Prokofiev, as well as spread over five years a multi album Mozart project with solo and chamber music repertory. Out of his love for the music of Mozart, during the pandemic Federico created an educational series of short videos for his YouTube channel designed to re-discover Mozart’s Fantasy in C minor K475 and place Mozart’s musical ideas in a historical and cultural context. Inspired by the mystery surrounding the genesis of the piece, Federico created an invigorating story based on his deep-dive research into Mozart’s biographies, letters and XVIII century history and culture.

Born in Brescia in 1988, he has been studying at the Milan Conservatory, Imola International Piano Academy and Salzburg Mozarteum, under the guidance of Sergio Marengoni, Konstantin Bogino, Boris Petrushansky and Pavel Gililov.

BACH-BUSONI: Chaconne from Partita No. 2 in D minor

Of Scarlatti’s 555 sonatas, no two are alike. They range from the pastorale and contemplative to the wildly exciting. It is music that is highly descriptive, but without being programmatic. Although written for the harpsichord, these miniature masterworks transfer remarkably well to the modern piano, its wide palette of colours shining even more brightly and vividly when played by a musician like Colli.

Although written for the solo piano, Mozart’s Sonata in B-flat shows the influence of the composer’s concerto writing, as there is much interplay between the “solo” piano writing and the contrasting, more orchestral texture in the 1st movement. Even more remarkably, toward the end of the last movement, the composer pauses the music, and gives the soloist the spotlight with a cadenza. before the “orchestra” returns to finish the work with a flourish.

Originally written for piano, four hands, Schubert’s Fantasy in F minor is, without a doubt, an ingenious piece of chamber music writing. Beginning and ending with one of Schubert’s most haunting melodies, the fantasy takes listeners through a musical journey of many shifting moods and colours. This recital will give us a rare opportunity to hear this work transcribed for a single pianist.

Busoni wrote so many transcriptions of works by J. S. Bach that he was once introduced at a party as “Mr. Bach-Busoni”. His transcription of Bach’s monumental Chaconne for solo violin transforms the austere colours of the original into a highly dramatic and romantic masterpiece of piano writing.

La Scena Musica writes, “Scarlatti hasn’t been this much fun since Horowitz left it off his encores list.”