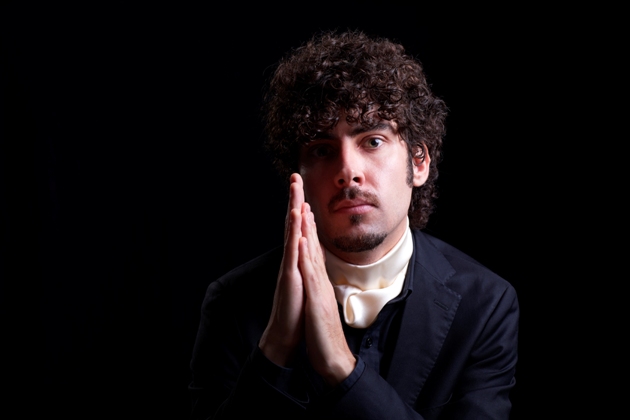 Undisputed winner of the 2012 Leeds Piano Competition, this young artist has already been praised for his brilliant technique, the colours he brings to his piano playing, and his vibrant and original interpretations. Of a recent performance of Rachmaninoff’s 3rd piano concerto, International Piano calls Colli “a maverick genius.”

A deeply serious musician and musical thinker, Colli sees his music making as a mission coming from a divine gift. He says, “I want to serve the music, expressing the truth, paying tribute to the beauty.” An exclusive recording artist with Chandos Records, his two recordings have both received rave reviews. Of his Scarlatti, La Scena Musica writes, “Scarlatti hasn’t been this much fun since Horowitz left it off his encores list.”

For Colli, the art of music “is a never-ending creative process, and for this reason it will always be ahead of us, moving infinitely.” It is not surprising that his artistry and pianism have often been compared to masters like Lipatti, Michelangeli and Pollini.

We know that this will be a debut you will remember for a long time to come. Come and be swept off your feet by the playing of this young genius.

The concert opens with a group of charming sonatas by Scarlatti and continues with Bach’s Italian Concerto BWV 971. He concludes with Busoni’s transcription of Bach’s monumental Chaconne, a work that challenges to the utmost every pianist’s technical and interpretative abilities.

In the forward to his keyboard sonatas, Domenico Scarlatti writes the following words, addressed “To the performer”:
Whether you be dilettante or connoisseur, seek not profundity in these compositions but rather artistic ingenuity and delight with the object of exercising freedom on the gravicembalo. Neither personal interest nor ambition so much as obedience has motivated me to publish these pieces. Perhaps they will cause you pleasure – in which case I will all the more gladly strive to meet further requests for a lighter and varied style. Therefore, show yourself more well-disposed than critical and your pleasure will increase the more…May success be yours!

Indeed, this healthy outlook on his art, and a self-effacing attitude towards his creative works imbued these sonatas with a palpable sense of humour, with inventiveness, as well as with a wonderful palette of colours.

As early as 1709, Scarlatti had already entered, and reportedly won, a contest on the harpsichord with no less a figure than G. F. Handel in Rome, establishing him as the preeminent keyboard virtuoso of his time. That said, the bulk of his 500 plus sonatas were not composed until after 1719, when he entered the service of the king of Portugal as music teacher. In 1728, he followed the king’s daughter Maria Barbara to the court of Madrid after her marriage to the heir apparent of the Spanish throne.

Among these compositions, there are those that are light-hearted and colourful, but also a significant number of slower works that betray the same seriousness, depth, as well as poetry we find in the works of Scarlatti’s contemporary J. S. Bach.

Scarlatti wrote his sonatas for an instrument with the limits of two keyboards and just a few octaves. Yet, within these works we find the most novel and unexpected possibilities of his instrument. Writer Matthew Boyden comments, “Scarlatti was the first to liberate virtuoso playing from the anatomical restrictions of the ten fingers.” In spite of being composed for the harpsichord, these works transfer quite amazingly well to the modern piano.

Federico Colli has chosen to play four Scarlatti sonatas of varying character. From the technically challenging Sonata in D minor, K. 1, which gives the impression of a dialogue between the right and left hand, to the elegant and delicate Sonata in F minor, K. 19, to the introspective and deeply felt Sonata in D minor, K. 32, and finally to the boisterous and colourful Sonata in D major, K. 430, with the composition’s explicit instructions as to its character – Non presto ma a tempo di ballo (Not fast but in the tempo of a dance) – these pieces give a wonderful cross section of the originality and creative genius of this, in the words of Charles Burney, the “most modern” composer of his era.

The first works of Bach to be published himself, in 1731, were for the keyboard. These words were amassed under the title Clavierübung, clavier being the generic term covering all keyboard instruments, including the organ. The second part of the Clavierübung, published in 1735, contains this justly popular Italian Concerto, BWV 971 as well as the Overture in the French Style, BWV 831. The title page of the work reads, “Keyboard Practice Consisting in a Concerto after the Italian Taste.”

In this concerto, Bach combines the effect of a full and almost orchestral sound, with the more delicate solo treatment in the Italian style of his time. This contrast is characterized in the notation by the dynamic markings of forte (loud) and piano (soft).

The first and third movements of the work are filled with good humour, a feeling of vital propulsion as well as the aforementioned imitation of the concerto. The contrast, or “contest” between the tutti (full orchestra) and concertino (solo group of instruments) certainly highlights the principle of the concerto grosso, a form that had been popular since the 1600’s. The middle slow movement, in D minor, with its long, string-like melodic contour, puts us in the sound world of a gloriously austere solo aria, set against a sensitive orchestral string accompaniment.

In the early part of the 20th century, rarely did a piano recital go by without some grand transcription of one of Bach’s keyboard works by pianists such as Liszt, Taussig or Siloti. However, the one name that has become synonymous with Bach’s keyboard transcriptions has to be the pianist and composer Ferruccio Busoni, so much so that he was once introduced at a party as “Mr. Bach-Busoni”. Indeed, Busoni is arguably better known for his many Bach transcriptions than he is for his original compositions.

Busoni’s transcription of Bach’s mighty Chaconne, from his Violin Partita No. 2 in D minor, stands quite apart from its original as a masterpiece of piano writing. The original Chaconne for solo violin – surely the Mount Everest of the violin repertoire – seems to have inspired many composers in making their own arrangement of it. Johannes Brahms wrote a piano transcription of the work for left hand alone. Lesser-known names such as Joachim Raff, Isidor Philipp, and Hans Harthan have also attempted their own arrangements of this acknowledge masterpiece for the violin.

As one of the 20th century’s great pianists, Busoni’s magisterial transcription, while fully respecting Bach’s original, exploits (in the best sense of the word) all the possibilities and tonal resources of the modern piano. Himself an accomplished composer, Busoni transcribed the work as a fellow composer, not a mere virtuoso out to wow his audience. As a pianist, he knew exactly what his instrument could do, and acted accordingly. The result is a composition that retains the majesty of Bach’s original, presented with all the colours and tonal splendor of the modern piano.

Notes by Patrick May

La Scena Musica writes, “Scarlatti hasn’t been this much fun since Horowitz left it off his encores list.”