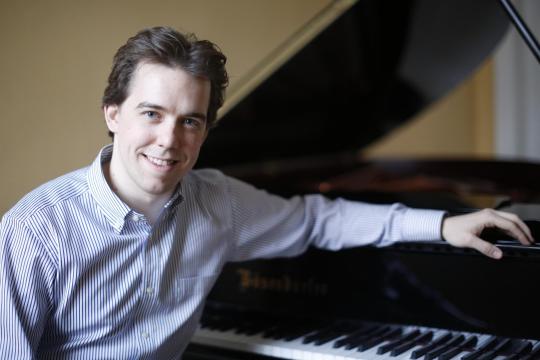 Magee Theatre
Ingolf Wonder’s Website
Ingolf Wunder was the 2nd prize winner at the 16th International Chopin Competition in Warsaw. This prestigious competition, coinciding in 2010 with the worldwide celebrations of the bicentennial of Chopin’s birth, brought to Warsaw unparalleled talents from all over the world, lifting the level of this particular competition to the highest in decades. Additionally he received a public award for “the best competition pianist” and special prizes for “the best performance of a concerto and the Polonaise-Fantasie”.

Ingolf Wunder was born in Austria in 1985. “A wonder of the piano” is an epithet accompanying him in the essays of music critics. This praise, however, has not yet affected the performer who is able to grasp the essence of any piece with incredibly good technique and to feel it especially deeply and sensitively. Wunder, who played violin until he was fourteen-years-old, related that he became a pianist only by chance, when his violin teacher heard him playing the piano while waiting for his lesson to start. There was no doubt – it was meant for Ingolf to become a pianist. “…the eminent Chopin pianist and jury member Dang Thai Son, made a remark that at the conclusion of a truly great performance of a work, the pianist should leave the listener with nothing left to say, it was so flawless, finished and complete. This is how I felt about Wunder and the E minor concerto last night”. Michael Moran

“His playing is a mixture of technical perfection and a very Polish spirit. You can hear he was spending hours with Adam Harasiewicz who won the Warsaw Competition 55 years ago. People were saying at the time that Harasiewicz played like Rubinstein. Wunder’s playing is in the same category. He has no technical problems whatsoever. There is simplicity in his phrasing. His pianism is absolutely perfect. Witold Lutosławski once said: ‘the music begins where the words end’.” Pawel Kowalski
‘Wunder has got everything one wants to hear in a Chopin player. His is a very patrician, aristocratic kind of sound. He’s got an absolutely beautiful sense of tone and huge musical imagination, coupled with incredible virtuosity.’ John Allison