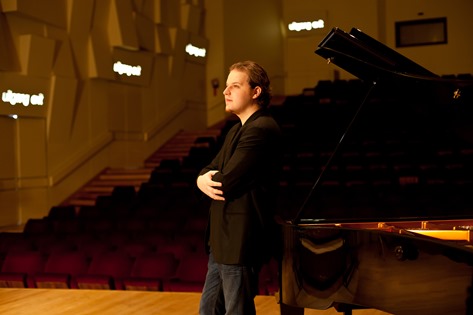 At this February 3rd concert, we will have a special ceremony to acknowledge and thank our friends at Sikora’s, for their loving service to Vancouver music lovers, and for their support of The Vancouver Chopin Society. There will also be a draw for some fabulous CD’s. Come and say goodbye to Ed and Roger! To get a 20% discount use a special promo code: Sikoras

“There was the same air of colossal decisiveness about everything that followed. It’s been a while since I heard a pianist with such a naturally huge tone, achieved without any trace of harshness.”– The Telegraph

The undisputed and unanimous winner of the 2016 Queen Elisabeth Piano Competition, Lukas Vondracek stunned the distinguished judges with his performance of Brahms’ Sonata in F minor.

Of a subsequent performance of that very Brahms sonata, critic Ivan Hewitt of The Telegraph writes: “The first phrase strides heroically up the piano, reaching a peak of colossal ringing affirmation.” The writer added that in the quieter moments of the work, Vondracek “opened up deep perspectives in the music.”

Recent highlights in his very busy concert season include concerto performances with the Philadelphia Orchestra and the St. Petersburg Philharmonic, as well as recitals at, among others, the Mariinsky Theatre, Leipzig’s Gewandhaus, and the Menuhin Festival Gstaad.

Even before his win at the Queen Elisabeth, Vondracek had already been an active recording artist. His first recording (2004) featured works by Mendelssohn, Liszt, Janácek and Dohnányi, while the second (2013) presented music of Brahms.