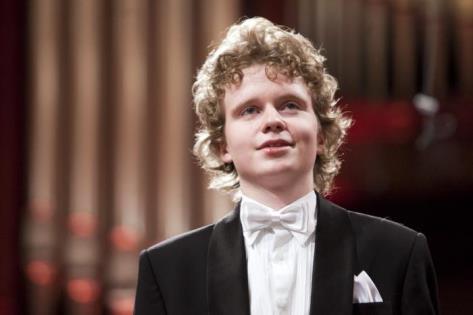 “The piano seemed to have acquired a bow to draw out with seamless legato while the accompaniment floated around like incense. This young man is a master of romantic tone.”– The New York Concert Review

We begin our season with the return of Nikolay Khozyainov, who created such a sensation with our audience that we just had to bring him back.

Khozyainov’s musicality and effortless technique have been thrilling audiences around the world, and his recital and concerto engagements have included sold out appearances at Carnegie Hall, Wigmore Hall, Lincoln Center, the Kennedy Center, Moscow’s Tchaikovsky Hall, Suntory Hall, as well as Salle Gaveau. His performances have been garnering glowing reviews wherever he has performed.

Prizewinner of many prestigious piano competitions, this young artist already has four albums in his discography.

At the 2012 Dublin International Piano Competition, distinguished pianist and teacher John O’ Conor said of Khozyainov, that in spite of his very young age, he “played like a young God of the piano.” Need we say more?

Don’t miss the return appearance of this “young God of the piano.”