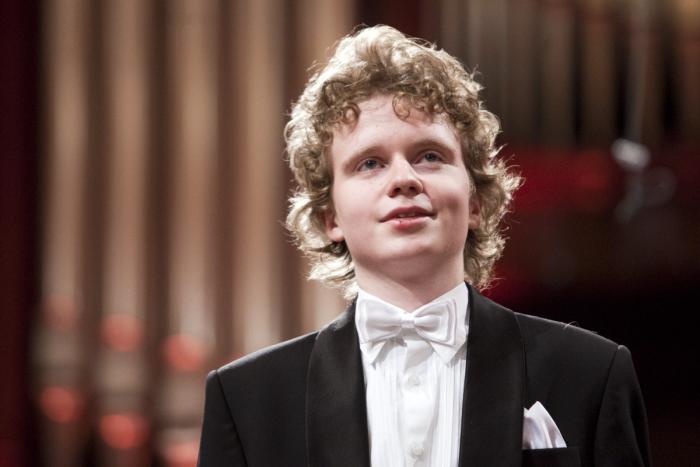 “…Now comes a Chopin and Liszt program by…Nikolay Khozyainov. He has everything: a big sound, splendid technique, and a musicality far beyond his years. This CD would do credit to any pianist…Every time I listened to this CD, my impression of Khozyainov’s artistry grew richer and fuller. In a time of glitzy young pianists typified by Lang Lang, the appearance of a talent like Khozyainov’s is all the more refreshing. …He clearly is a special artist. The fact that, at his age, his talent only can grow is intimidating. The possibilities for his artistry seem almost limitless.” – Dave Saemann,  Fanfare, July 2012, review Khozyainov’s first CD.

Born in 1992, Nikolay Khozyainov is one of the most promising pianists of his generation. He He began learning piano at the age of five. A former pupil of the Central School of Music in Moscow, since 2005 he has trained with the outstanding Mikhail Voskresensky and since 2010 he has been a student of the Moscow Conservatory.

Khozyainov won the Dublin International Piano Competition (2012) where John O’Conor, Artistic Director of the Competition since its inception, reflected on Mr. Khozyainov’s remarkable triumph: “I was reluctant to award First Prize of this prestigious competition to such a young performer, but when Nikolay Khozyainov played like a young God of the piano, how could we not give him the support that his immense talent so richly deserved?”. He was runner-up in the Sydney International Piano Competition (2012), where he also received numerous special prizes, including the prizes for best performance of works by Liszt and Schubert, best performance of two concertos and the audience prize.

He was the youngest finalist in the Sixteenth International Chopin Competition in Warsaw (2010), where his interpretations and exceptional musicality were hugely appreciated by audiences and critics alike.

Last year, he made his debut at the Carnegie Hall, and in 2014 he will be appearing at the Wigmore Hall.

In 2011, he recorded a solo CD featuring works by Chopin and Liszt (CD Accord), and in 2012 he recorded a new Chopin CD for Chopin Institute in Warsaw and a new CD for JVC Victor in Japan.