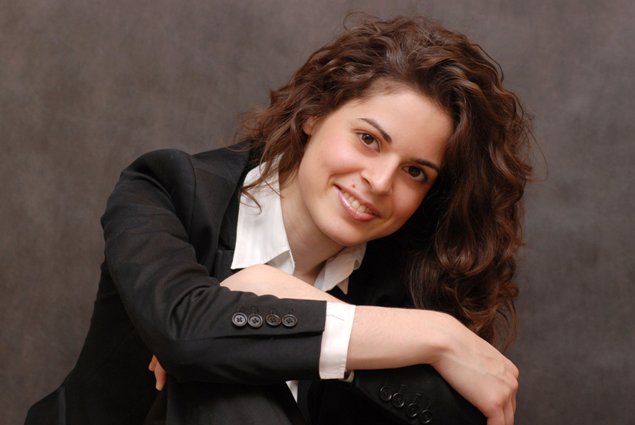 “The possessor of a comprehensive technique who brings an inner glow to every bar… Poetic and pianistic command could hardly go further.”-Gramophone

In the words of legendary pianist Stephen Kovacevich, Zlata Chochieva is “one of the most interesting and unusual pianists today.” Her recording of Chopin’s Etudes was included in Gramophone magazine’s list of “The 50 Greatest Chopin Recordings,” alongside recordings by Cortot, Pollini and Rubinstein. The reviewer calls the disc “one of the most consistently inspired, masterfully executed, and beautiful-sounding versions I can recall.” According to another review, Chochieva “brings an inner glow to every bar” of music she plays.”

Musicians and critics alike have been running out of superlatives in describing her artistry and pianism.

Chochieva made her concerto debut at the age of 8 in the historic Great Hall of the Moscow Conservatory. In her own words, “Music is born in the moment. The concert hall is exciting, full of risks, and what we achieve there is a mixture of what we have prepared intellectually and the spontaneity that inspiration gives us.”

In the 2019 season, she will also be making her debut at London’s iconic Wigmore Hall, as well as in Moscow with the Svetlanov State Orchestra.

Come and be witness to the remarkable artistry of this young musician.

Please note the following change of programme!
This first recital of the season begins with Chopin’s set of Twelve Etudes, Op. 25, heavenly music that changed piano technique forever. After the interval, Zlata Chochieva draws upon her Russian heritage and presents an all-Rachmaninov programme, with his transcriptions of works by Bach, Bizet and Mendelssohn, including the fiendishly difficult Scherzo from “A Midsummer Night’s Dream”, a work that challenges all but the most fearless pianists. The recital ends with the composer’s exploration of the theme and variation form – his magnificent Variations on a Theme by Corelli.

“The possessor of a comprehensive technique who brings an inner glow to every bar… Poetic and pianistic command could hardly go further.”-Gramophone

“Chochieva, though, is the real discovery;…performances of huge emotional scope and intense drama” – Andrew Clements, The Guardian

“A famous pianist (I shan’t say who) to whom I was speaking recently said I really should hear this young Russian pianist Zlata Chochieva in the Chopin Etudes. ‘It is,’ averred my informant, ‘the greatest I’ve ever heard.’ Quite a claim.” -Jeremy Nicholas, Gramophone

WIN A TRIP TO WARSAW
You will have a chance to win a trip to Warsaw for the Finals of the 18th International Fryderyk Chopin Piano Competition, to be held October 2020 in Warsaw. The package includes a round trip flight for one person, two tickets for the Finals and three days of accommodation. To qualify for the draw, you will have to be a subscriber OR a single ticket holder for the Kevin Kenner recital. The draw will be held at the Kenner performance on November 24, 2019.